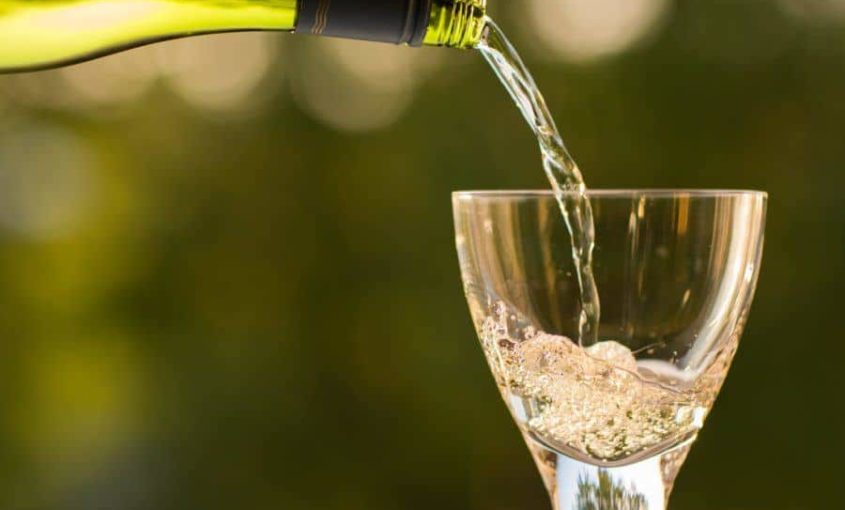 Surely the best antidote to the unending grey (and rain) of a British January is a vision in bright white, topped with azure and studded with fuchsia: a hot-climate colour combination that comes with the useful side benefit of nurturing great grapes. You can uncork a bottle of assyrtiko from Santorini – itself a pure pale gold reminiscent of sunshine – or better yet, schedule a trip to this tiny volcanic island where the houses are roofed in Mediterranean blue and decorated with a shocking-pink flower that would offset our winter sky beautifully, if only it could be persuaded to grow here.

Actually, it’s amazing that Santorini has any greenery at all, much less perky flora and superb vines, because the sunshine that calls to us Brits like the song of a Mediterranean Siren can also lure growing things to their doom. The fat grapes of Santorini, like the withered denizens of northern Europe, thrive on sunshine, but in summer, like pale-skinned tourists, they can get too much of a good thing, particularly on a porous island where water is so scarce residents have been known to gather the morning dew.

The winemakers of this Greek outcrop long ago found a unique solution to this problem, with the result that, as well as breath-catching sea views, black-sand beaches, spectacular sunsets and an abundance of the kind of restaurant that stations a man outside to entice you in and doesn’t blink twice at an order of omelette and chips, Santorini boasts its own grape varieties and an ingenious method of cultivating them despite the intense heat and lack of shade. Or water. Or peace and quiet, given that this is a 30-square-mile island with two volcanoes.

The thick, woody vines are persuaded to coil round on themselves, like baskets. The leaves sprout skywards, while the grapes nestle within, protected from the sun and the island’s strong winds, and so low to the ground that minor seismic activity won’t unsettle them. The result looks less like a vineyard than a field’s worth of bad hair days.

The grapes themselves are indigenous, and very old: the Greeks taught the Romans to make wine. Assyrtiko is the one to look out for. There are other interesting white grapes, including aidani and athiri, generally used as blending components in the island’s sweet wine, Vinsanto, although Estate Argyros makes a pure aidani, a tangy aperitif-style quaffer that slips down nicely with a good sunset. I checked, on the patio at Heliotopos Hotel, in the village of Imerovigli, with the caldera – the sunken result of a volcanic eruption 3,600 years ago – in long shot and a plate of superb tomato keftedes in close-up.

Aidani and athiri also go into Argyros’s Atlantis, which is mostly assyrtiko and is part of Marks & Spencer’s Eastern Mediterranean range. Assyrtiko wines have the cool minerality of the soil that nurtures the vines, although nurture may be an exaggeration: this soil is actually pumice, and as anyone who has ever taken a pumice stone into the bath will know, it does not hold water. These vines, some hundreds of years old, have deep roots but still have to get most of their moisture from humidity in the air, which makes their thirst-quenching gifts somewhat ironic.

Wine tourism is easy here. Boutari Winery in Megalohori may be the best organised, but most vineyards welcome curious tourists for tastings, although don’t expect the slick facilities of Australia’s wineries. Haridimos Hatzidakis, who sells his wonderful wines to Waitrose, has a Portakabin for a winery and a tasting room roofed in dried foliage. And just as you literally can’t go far from winemaking activity on this small island, so you can’t in any other sense, either.

The best restaurant I ate at was called Nichteri, meaning nightwork, or the after-hours grape-picking that’s the only way to avoid the heat (Hatzidakis has a terrific late-picked assyrtiko called Nikteri, available in the UK from Theatre of Wine). The nightwork happening here, though, is a little different. The remarkable menu laughs in the face of moussaka and feta salad, using local ingredients (Santorini tomatoes and fava beans, a meat sauce from Vinsanto wine) to really show what Greek food can do. The wine list is mostly local and entirely excellent.

One hotel I stayed at, Vedema, a beautiful place in the titchy village of Megalohori (which none the less houses three wineries, Boutari, Antoniou and Gavala), was even a 400-year-old converted winery. Nowadays, it possesses an excellent open-air restaurant, spa and rooms with patio Jacuzzis and vineyard views. There is also a minibus service to the nearest black-sand beach. The wine bar, in the old cellars, offers private tastings, enjoyed by, among others, Jodie Foster (who knows her wines, according to the sommelier).

What is amazing about Santorini is how much they do with so little. The sun is too hot, the soil too porous and there are fewer than 3,000 acres of vines, yet Argyros supplies M & S and Hatzidakis Waitrose. Given the perilous state of the Greek economy, the ability to achieve a great deal with not much may prove useful, although it won’t help the struggle to preserve Santorini’s wine industry from encroaching tourism, ongoing since the 1982 film Summer Lovers made clear that this was the place to find sun, sand, spectacular views – and Daryl Hannah in a bikini.

What is now the airport was once vines, and it is far easier to build a hotel than to turn old, capricious grapes into wine. Fortunately, men like Hatzidakis and Stefanos Georgas, winemaker for Argyros, still think the heinous effort is worth it. And I agree, although being a sun-starved tourist, I would: all I have to do is bask in the sun, nibble my keftedes and sample the results.