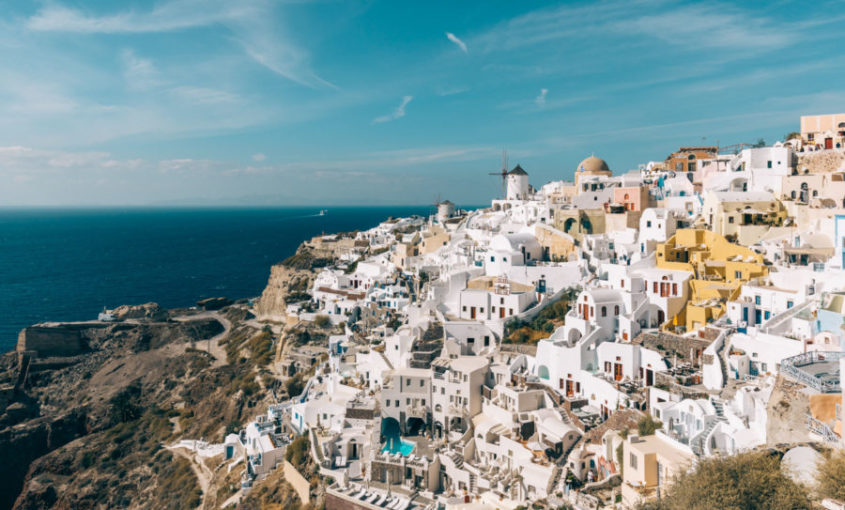 Αn insider’s guide to the best things to do and attractions in Santoríni, including visiting the Firá museums, scuba-diving the caldera, touring the wineries, or enjoying the best beaches and walking tracks.

Sample the curiosities of this volcanic island – the strange black-sand beaches of the east coast or the zig-zag stair-paths down to the little ports below Oía and Firá. Alternatively just gawp at the hypnotic views over the caldera – though as with lodging, you’ll pay extra for the privilege when drinking or dining.

Away from the caldera edge, the most striking village is Pýrgos, the highest on the island and its capital until the 19th century, with sweeping 270° views, and not just from the mostly intact castle at the summit. Amongst the warren of lanes lower down is Crossroad Antiques, the island’s best shop for old engravings and objets d’art.

Firá museums
By far the best museum here is the impeccable Museum of Prehistoric Thera (daily, except Tues 8am-3pm, may open later summer; €6) near the Orthodox cathedral, largely devoted to the Minoan settlement at Akrotíri. The star exhibits are original frescoes of cavorting blue monkeys, elegant women (one semi-nude) and Nilotic vegetation proving seafaring contacts with Egypt.

The Archeological Museum on Ypapandís Street (May-Oct Tues-Sun 9am-4pm, Nov-April 8am-3pm; €3), warehousing finds from ancient Thera, by contrast desperately needs a refit, but there is some fine Archaic and early Classical pottery, plus battered stone heads of lions and kouroi.

Museum of Prehistoric Thera
On the north side of town, Megaro Gyzi (May-Sept Sun-Mon 10am-4pm, Tues-Sat 10am-9pm; Oct daily, 10am-4pm; €3) inside the former Catholic archbishopric holds a fascinating miscellany of old engravings by French Grand Tourists, antiquarian maps (with the caldera labelled ‘sans fond’), views of the 1866 eruption, the island as interpreted by Greek painters, and fascinating pre-1956 photos, including ones of the fishermen’s hamlet which existed on Néa Kaméni islet prior to its 1950 eruption.

You may take an optional extra tour (€10) into areas of the archbishopric not normally open to the public – a warren of convents and churches. Rita Ricci (00 306979 473632) is a knowledgable, personable guide, often at the ticket counter. First up is the Madonna del Rosario church, where fifteen Dominican nuns still worship on occasion behind a curtain. The next insitution, a former convent of the Daughters of Charity of St Vincent de Paul, is now a priests’ residence, with a lovely arcaded courtyard. Cross another garden to the former Lazarist monastery, shattered in 1956 but being restored. Their richly decorated church, dedicated to the Immaculate Conception, survived, adorned with paintings or statues of Lazarist martyrs in China, St Joseph with infant Jesus, St Vincent de Paul, Christ in Gethsemane, a Pietà and, most strangely, támmata (flat-relief metal votives), beloved in Orthodoxy but rare in Catholicism.

Catholics have had a long, distinguished history on Santoríni since they first settled at Skáros castle in the 1200s, later leaving for Firá. They were disproportionately important in local education – one priest, Don Pasquale, taught music for nearly a century (1866–1956), as documented by photos of his students’ bands – and the Santorinean economy. Except for a few monks and nuns, they all emigrated to Athens or abroad after the 1956 earthquake which destroyed local commerce.

Nearby, the Catholic cathedral of Ágios Ioánnis Pródromos (open most of the day) still functions and merits a peek inside.

The Lignos Folklore Museum in Kondohóri suburb (daily, 10am–2pm; €3 includes guided tour in English) completely reproduces a 19th-century cave-house, along with mocked-up workshops for all the vanished rural crafts of the island, including an old-fashioned cave-winery or kánava. The best of an antique shop’s worth of impedimenta is an ingenious wooden threshing device.

At the southerly tip of the island, the former Nomikos tomato cannery has become the Tomato Industrial Museum (daily, 10am–6pm, €5), primarily displays of processing machinery in situ – Santoríni is still known for its intensely flavoured sun-dried and canned tomatoes.

Beaches
Of the island beaches, almost all featuring dark-grey volcanic sand (and in September, brilliant, fragrant white thalassókrini or sand lilies), Kamári is the most manicured and amenitied.

Kamári
There are other top-drawer strands at southeast-facing Perívolos, which has beach bars pitched at a younger crowd and is found immediately south of busier and narrower Períssa, which unlike Perívolos has a slimy reef to cross getting into the sea.

Also notable are Baxédes and Kouloúmbos, the only real beaches near Oía (pronounced ‘Ee-ya’), and ideally for days when the wind is from the south, though they’re not as windy as their exposure would suggest. Kouloúmbos has better amenities (a sunbed/brollie outfit and an eponymous taverna just inland); Baxédes has clean sand and no nasty rocks in the shallows, with views across to Íos. Scenic, postcard-star Kókkini Ámmos cove near the ancient Minoan site at Akrotíri has reddish-purple sand but gets very crowded.

Winery (and brewery) tours
Santoríni has been designated an AOC domaine, and winemaking is the only traditional trade that’s still in rude health. Before 1917, much of the annual production was exported to Russia for ecclesiastical use. For a few euros (or even sometimes for free), winery tours usually allow generous sampling. Boutari, near Megalohóri (00 30 22860 81011; boutari.gr) is the biggest and most visited, with frequent tours daily, April–Oct 10am–6pm, but much the most impressive nearby outfit is Venetsanos (venetsanoswinery.com; tours May–Aug daily, 10am–10pm, Sept–Oct daily, 10am–9pm, Nov–Apr Mon–Fri 10am–3pm, may shut 21 Dec–11Jan).

This was Santoríni’s first industrial winery, built at a time (1947) when the island had no mains electricity and all procedures were gravity- or hand-assisted. Tours visit the stunning, four-level, ochre-washed vaulted interior, starting at the top where grapes were pressed and de-stemmed by machinery imported from French Algeria. The must finally ended up in giant, dugout fermentation vats at the very bottom; you can peek inside them. From these, pipes led 400m down the steep cliffs to Athiniós harbour, only a freight port back then. Tastings, at or near a caldera-view terrace café, offer just three white labels and one vinsánto (a fortified dessert wine produced by most Santoríni wineries); the barrel-aged 14% nykhtéri white is super-dry but quaffable.

Venetsanos
Venetsanos was Santoríni’s first industrial winery
Hatzidakis Winery (hatzidakiswines.gr) near Pýrgos, has long been a popular source of barrel (carafe) wine for local tavernas, as well as rakí (distilled clear spirit), and now also offers six whites in bottle, three dessert wines, a rosé and a dry red. We rather liked the crisp white from organically grown aïdani grapes, and a red (less common here) based on mavrotrágano grapes. But their new, 2016-inaugurated winery is not yet really geared up for tastings – best call English-speaking Sophia Vamvakouri (00 30 6974 968228) to arrange a visit.

Other microwineries to seek out include two in Episkopí Goniás: Canava Roussos (canavaroussos.gr; May–Oct), the oldest on the island, and Ktima Argyrou (estate-argyros.com), which does an excellent red from local mavrotrágano grapes, and the distinctive aïdani white, fruitier and lighter than the ubiquitous assýrtiko variety.

Nearby we especially like Art Space (Apr–Oct 11am–sunset; artspace-santorini.com), where the old kánaves (wine cellars) have been converted into the Cyclades’ largest art gallery, near displays of old winemaking and distilling equipment dating to 1830. Notable products of their contemporary winery include the premium Agios Avgoustos whites, several grades of vinsánto and strong but smooth rakí.

Just down the road stands the only true local microbrewery, Santorini Brewing Company (santorinibrewingcompany.gr) with its unmistakable donkey logo. We especially like their Red Donkey brew, stronger (5.6%) than the more widespread Yellow Donkey label (5%); for couples there’s Crazy Donkey, an india pale ale in 750ml bottles. They’re open for visits Mon–Sat noon–5pm, with a handy bus stop right out front. ‘Donkey’ beers are unfiltered and unpasteurised, so must be stored and served cold – decline any that aren’t, as they’ve likely gone off. Be aware that the other beer widely touted as local, Volkan, is actually brewed on the mainland merely using Santoríni rocks to filter it.

The north of the island also has a few wineries, the most welcoming and interesting being Vassaltis (vassaltis.com, daily, Apr-Oct 11am-7pm, winter by appointment) half a mile/800m north of Vourvoúlos village. It’s Santoríni’s newest, EU-funded winery, opened May 2016. Rather stunning premises in industrial-chic style (think bare, rough planks for both the ceiling and the tasting counters) look east about a mile to the Aegean. Ilias Roussakis, one of three partners, is a likely, genial guide to their eight, mostly white labels, available in the UK through Wimbledon Wine Cellars. Nassitis is their entry-level blend of aïdani (60%), athíri (30%) and assýrtiko (10%) grapes; their oak-barrel aged 100% assýrtiko is also fine. Vassaltis mostly eschews barrels, however, preferring to age in steel tanks.

Walking
Perhaps surprisingly in such lunar terrain, there are more than a dozen marked walking routes on Santoríni, shown on the recommended map. On the spot, you can recognise them from sturdy wooden signposts, with red route-number metal tags. The two most spectacular itineraries, where you’ll certainly have company, are No. 9, linking Imerovígli with Oía on an improved path skimming the caldera edge (allow 2 hrs), and No. 3 along an old cobbled, hillside trail connecting Períssa and Kamári, via the ruins of Classical-Roman Thera and the cave of Zoödóhos Pigí, containing the only potable (and very tasty – fill your bottle) spring on the island (1hr 30min). In Kamári, shuttle boats await to whisk you back to Períssa.

Day trips
Excursion boats set out from Skála Firás and Ammoúdi, the port of Oía, for the volcano-islets of Paleá Kaméni and Néa Kaméni. The best deals leave from Skála Firá: departures at 11am and 2pm for the volcano only, 3hr tour/€20. Tours first visit submarine hot springs between the two islets, which mix with the sea to a comfortable 35–39° C; then swap your bathing costume for sturdy shoes and hike through the lava-fields of Néa, last active in 1950. At 10.45am a single tour departs which includes Thirasiá, Santoríni’s only inhabited satellite islet (return 4.15pm, €26). After stops at the Néa volcano and hot springs, you’re taken for lunch at the shore settlement of Kórfos. You can also visit Thirasiá via the three scheduled mini-ferries daily from Ammoúdi, which may call instead at northerly Ríva bay. Coastal tavernas are as commercialized as anything on Santoríni proper; service is apt to be better once the volcanic-islet tour patrons have moved on.

Scuba diving
Instead of gawping at the caldera like everyone else, why not dive into it? There are nearly forty recognised scuba sites at Santoríni and Thirasiá, mostly around the caldera and its islets. Visibility (except near the mineral-rich outflow of the Kaméni hot springs) is usually good, 20m or more, but sea life is limited – this isn’t the Red Sea or the Caribbean. Beginners’ sites face the open Aegean, at Mésa Pigádia near the southwest tip of the island. The caldera offers the most exciting diving, for example at Aspronísi, where wrasse and damselfish frequent a steeply plunging wall, or around the World War II wreck between the two Kaméni islets, a freighter in good condition with hovering parrot fish and cement sacks still stowed in the bow.