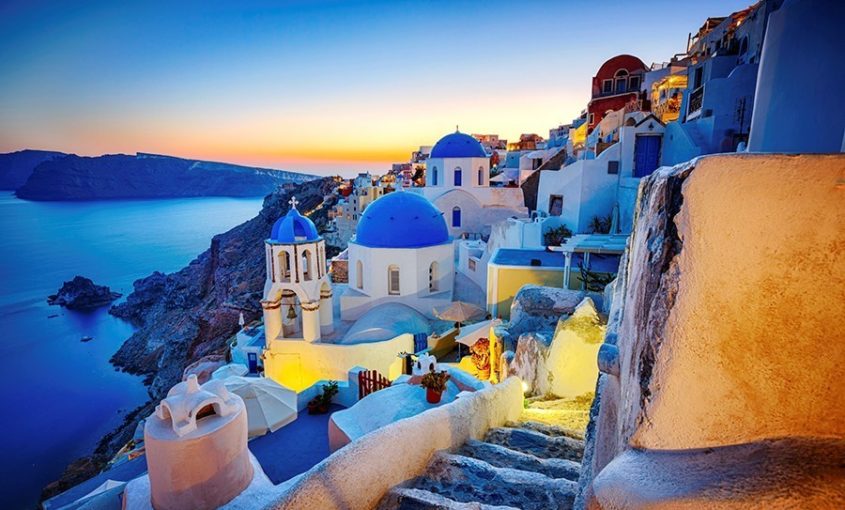 Until about 1620 BC, Santoríni-then called Kallisti- was just another volcanic island, with a Minoan town on the south shore and volatile magma chambers under the middle. Then came one of the most violent known eruptions of its type, causing the centre of the island to collapse into the now-empty caldera. The sea rushed in to fill it, leaving only the present, crescent-shaped island above water. The accompanying earthquake triggered a tsunami which accelerated the demise of Minoan Crete.

The island was eventually resettled as ancient Thera, but inhabitants had to contend with fresh eruptions, which created two islets in the caldera beginning in 46 AD, and repeated tremors- a 1956 one levelled most of the two main villages, Firá and Oía.

Santoríni is really best approached by sea; as your arriving craft manoeuvres over the impossibly midnight blue waters of the caldera, the sheer lava cliffs of the caldera lip, layered in varicoloured rock, loom overhead, with white houses on top like a dusting of snow.

It’s one of the spectacles of the Med, as is the reverse practice of staring out over the caldera waters from up top – something not lost on the strangely assorted clientele of honeymooners, cruise-ship patrons and backpackers.

When to go to Santoríni
The Cyclades are most enjoyable in late spring- when the landscape is still green, the sea has warmed up to feasible swimming temperatures, but the crowds have yet to descend- and early autumn, when the summer hordes have departed and the sea is at its warmest. In both spring and autumn you can expect attractive prices for accommodation compared to summer.

But take note- not too late in autumn; after the third week in September many facilities close down, storms do hit, ferry links get sparse but paradoxically cruise ship calls at Santoríni become more frequent, with their patrons on shore leave clogging the streets of Firá and Oía towns much of the day. There are also swarms of flies to contend with through much of September and October. Alone among the Cyclades, Santoríni- with a permanent population of about 25,000- gets significant winter tourism, especially at holiday weekends.

Where to go
The one ‘must’ in Firá is the Museum of Prehistoric Thera, with its Minoan murals rescued from pre-cataclysm Akrotíri. Santoríni’s dark, volcanic-sand or pebble beaches are as much curiosities as bathing venues; the most practical and enjoyable are Perivólas and Vlyháda in the far south of the island. Two classic hiking routes among many go from Períssa to Kamári, past post-eruption ancient Thera, and along the caldera edge from Imerovígli to Oía. For a sense of the ancient volcano’s lingering power, take a day-trip to the caldera islets with their shoreline hot springs and clinker surfaces.