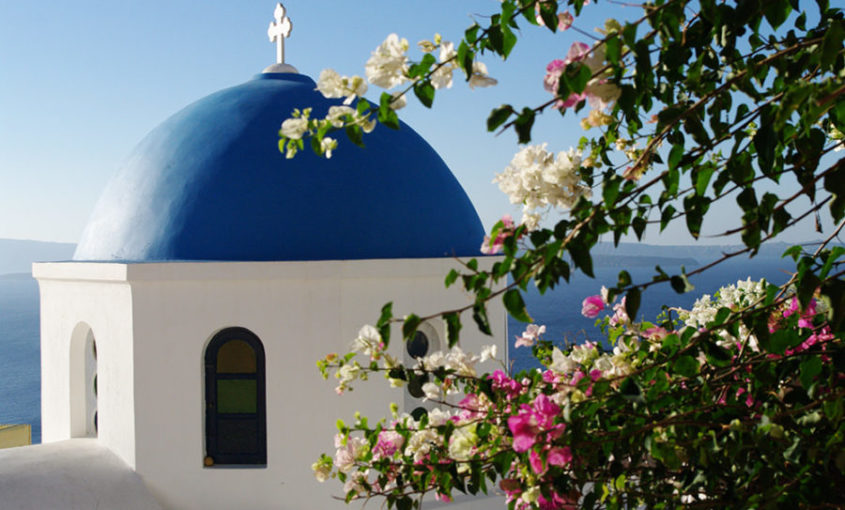 Whether you’ve had the privilege of visiting Santorini—aka one of the most romantic islands in the world—or not, you probably know what it looks like. Photos of vibrant blue waters overlooked by whitewashed stone homes nestled above pristine beaches are constantly fueling wanderlust around the world (guilty as charged). But, as with many other destinations around the world, Santorini is more than just a pretty face. The island has plenty to offer in the way of quirky historical facts, geographical travel obstacles, and must-sees that only the locals know about.

There Are Not That Many Blue Rooftops on the Island
The same bright blue rooftops pop up in everyone’s photos of Santorini—enough to make you think the entire island is full of them. In reality, these photos are all variations on one vista (pictured here). You can find the most famous blue rooftops in Oia Town—you’ll know them when you see them.

Some People Think Atlantis is Located Around Santorini
Many believe you can find the mythical ruins of Atlantis buried underneath the sea around Santorini—and that the now tourist hot-spot was once actually known as the fabled location many explorers seek. The two destinations’ stories are strangely similar—Santorini was ruined by a series of eruptions thousands of years ago. Atlantis supposedly sunk deep under the sea after its people angered the gods. No matter where your belief lies, you can find your “paradise lost” in Santorini.

Checking Into a Hotel Can Take You Hours
Santorini is full of stairs—there isn’t a better construction that can withstand the test of time and get visitors to the hotels with the best views. Travel blogger Suzy Guese shared a personal experience on the island over on her website, sharing that “By the time I finally reached my room, I wanted to collapse.” She went on to explain that many of the hotels send guests to a tourist center at the base of the island, who will call upon your arrival and requests carriers to come through and help with your bags. Pro tip: Factor in a couple of hours for actually getting up to your hotel.

There are Still Effects from a Tsunami Thousands of Years Ago
You can still see some of the after-effects of the super tsunami that once claimed nearby Crete and created the archipelago system that is Santorini. Scientists recently discovered a layer of seabed 65 feet below the water’s surface that features pebbles and rocks with mollusks and other organisms oriented in the same direction (proving strong currents of water passing over an area very quickly).

The Entire Island is a Volcanic Rock
Santorini exists because of a giant event called the Minoan Eruption—one of the largest volcanic eruptions in the history of Earth. Santorini and its surrounding islands were created after a number of eruptions that spanned several hundred thousand years. The original volcano would erupt, slowly fill with magma and create a brand new volcano that would erupt and repeat the process. These leftover bits of volcanic landscape now make up Santorini and its surrounding islands.

Early Santorinians Slept in ‘Cave Houses’
To best withstand the weather, Santorinians would create homes directly inside the island’s volcanic walls. You can still stay in some of the modern takes on the traditional structures—but they’re much more luxurious than they were thousands of years ago.

Local Wine Supposedly Tastes Better Thanks to the Island’s Volcanic Landscape
The volcanic landscape offers an interesting environment for agriculture, and their local wine is known around the world for its unique taste. The land on Santorini is called “aspa,” and is made up of volcanic ash, pumice stone, and small pieces of solidified sand and lava. This combination leaves out most of the nutrients we’re used to expecting in soil, but is rich in minerals. Rainfall is very minimal, making these wines relatively hard to get. Aside from rain, growing areas receive moisture from a strange phenomenon called sea fog—a mix of air from the active volcano and the surrounding area.

Santorini Has ‘Secret’ Hot Springs
Well, they may not be entirely secret considering the entire island is a volcanic rock, but they aren’t as well-known as Iceland’s hot spring lagoons, that’s for sure. You’ll know when you’re swimming into the island’s warmer waters by the color change—the vibrant blue turns to a murky brown.